Day 1: Arrival – Kampala
Arrival and met by our company tour guide. Depending on the time of arrival you may opt to for a Kampala city tour or birding in either the botanical gardens or the Uganda Wildlife Education centre. They help give one an introduction to the different bird species in the country. Special birds here includes; African hobby, Ross’s Turaco, Brown and Grey Parrot, Klaas’s, Diederik, and Red-Chested Cuckoo, Fork Tailed Drongo, Brown Crowned Tchagra, white Chinned Prinia Black-headed Gonolek, to mention but a few.You will have an overnight stay at a hotel Entebbe or Kampala. 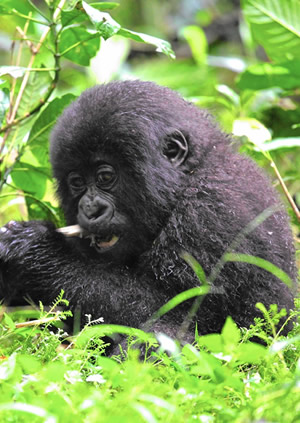 Day 4: Bwindi Forest National Park
Go for a guided nature walk for birding along Buhoma main trail and later on to the water fall trail. Bwindi is the Bird watchers haven! It holds 348 species of birds among which 90% of the Albertine rift Endemic are here i.e the Short-tailed, Rusty-faced woodland and Grauer’s Rush Warblers, Bar-tailed Trogon, Wilcock’s Honey-guide, Yellow-eyed black Fly-catcher, Kivu Ground Thrush, Dusky Crimsonwing, White-tailed Blue Monarch among others, difficult or impossible to see in any other part of East Africa. Alternatively, go for a Gorilla trek. Spend the night in Bwindi. Spend the night in Bwindi.

Day 5: Bwindi Impenetrable National Park
Birding today in Ruhija. Morning transfer with picnic lunch to Mubwindi swamp in Ruhija. The swamp at an elevation of 2050m/6725 holds astonishing birdlife among others; the Dwarf Honeyguide, Stripe-breasted Tit, Ruwenzori Apalis and African Hill Babbler, the rare and localized Graurer’s Scrub-warbler and Carruther’s Cisticola, including very difficult to see Fraser’s Eagle-Owl. Return to Ruhija for overnight.Spend the night in Bwindi.

Day 7: Game Drive and Launch Cruise
We take an early morning game drive towards the famous Kasenyi Track, winding through grassland dotted with trees and nearby crater lakes. The main aim is to locate Lions and other mammals including Buffalo, Ugandan Kob, Oribi, Waterbuck, Bushbuck and family groups of African Elephants. Along the road you may find Scaly Francolin, Red-necked Spurfowl, several plovers, Harlequin Quail and Common Button-quail. Larks are numerous and include, Red Capped, Rufous-napped, Flappet and the local White-tailed. Raptors include Martial Eagle, Banded Snake Eagles and Bateleur. In the afternoon we embark on a boat trip down the Kazinga Channel. This incredible area for waterbirds will afford stunning views of African Skimmer, Pink-backed Pelican, Saddle-billed, African Open Billed and Yellow Billed Stork, Hamerkop, African Spoonbill, Water Thick-knee, and over-summering Palearctic migrants
After lunch, go for a Launch cruise along the Kazinga Channel at 15.00 hours. Kazinga channel is a natural strip that joins Lake Edward to Lake George and actually this is one of your highlights of this safari. Dinner and overnight.

Day 10: Kibale Forest National Park
Have an early breakfast by 7.00 am and proceed to the park headquarters at Kanyanchu for briefing before going on the chimpanzee trek and bird watching in Kibale Forest. You will carry packed lunch from the lodge and lots of drinking water. Kibale Forest National Park has more than 335 bird species recorded. A network of forest trails from the Kanyanchu Visitor Centre allows you to search for a number of species from the vicinity of the main road such as nahan’s francolin, African pitas.
There is a large block of rain forest that offers some excellent forest birding. The best forest birding is along the main road from the Kanyanchu centre. Species such as scaly francolin, marsh tchagara, the scarce grey-headed olive-back and a host of seed eaters such as fawn breasted black crowned wax-bills and green-backed twin spot, among others, can easily be spotted.
While in the forest, you will watch out for flocks of the rare and localized white-naped pigeon in flight over head or sunning themselves on the tree tops in the early morning. Fruiting trees attract birds such as Narina trogon, pied hornbill, yellow-spotted, hairy-breasted and yellow-billed barbets.
The secondary forest and thicket around Kanyanchu is also a productive birding area for the African goshawk, the majestic ground eagle and masked apalis. Large, noisy flocks of grey parrots fly over the campsite to their roost in the evening. After lunch; we shall go for a nature walk in Bigodi swamp. Spend a night in Kibale Forest.

Day 13: Game drive and Launch Cruise
After an early breakfast, go for an early morning game drive that usually starts at 7.00 am. Return to the Lodge for a late breakfast at 11.00 am. After lunch, go for a Launch cruise to the bottom of the falls; the hippos and crocodiles are amazing. Don’t miss the water birds as well. Return to the lodge for dinner and overnight.

Day 14: Murchison Falls National Park – Kampala
at the end of your birding safari, you will have breakfast with a packed lunch, visit the top of the falls. Enjoy and marvel at the mighty Nile being forced in a seven meter crevice to thunder 45 meters below in a series of cascades that can be viewed at different points at the summit. Continue to Entebbe; arrive in time for your evening flight.
End of the Safari